The Rockwell B-1B "Lancer", affectionately known as the "Bone" to its crews, is a key element of the American Strategic Long Range bomber fleet. A development of the cancelled B-1A, the aircraft - while not technically stealth capable - still presents a fraction of the radar profile of the B-52 and incorporates extremely advanced navigation, weapons, and avionics systems. Its swing wing technology, combined with four 30,000-lb thrust turbofan, engines creates a beautiful, fast, and lethal package. The development of this successor to the B-52 began in the early 1960's and resulted in a contract being awarded to Rockwell in 1970. The B-1A first flew in 1974 but soon ran into political trouble. The project was cancelled in 1977 when only 3 prototypes existed. 1981 saw Ronald Reagan order a fleet of 100 B-1Bs, the last of which were delivered in the early 1990's. Designed for low-level, high speed penetration, the B-1B saw action in the Kosovo conflict and second Gulf War.

VIDEO : Use right-click, 'save target as' and download the .WMV file to your HD. Virtavia B-1B Lancer Video 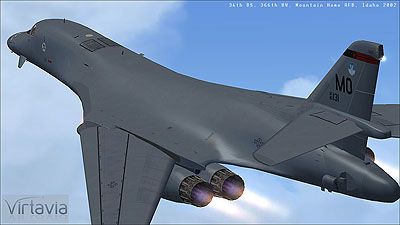