The Boeing-Vertol CH-47 Chinook is a versatile, twin-engine, tandem rotor heavy-lift helicopter. Its top speed of 170 knots (196 mph, 315 km/h) was faster than contemporary utility and attack helicopters of the 1960s. It is one of the few aircraft of that era such as the C-130 and the UH-1 'Huey' that is still in production and front line service with over 1,179 built so far. Its primary roles include troop movement, artillery emplacement and battlefield resupply.

VIDEO : Use right-click, 'save target as' and download the .WMV file to your HD. Virtavia CH-47D Chinook Video 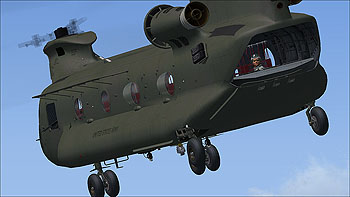