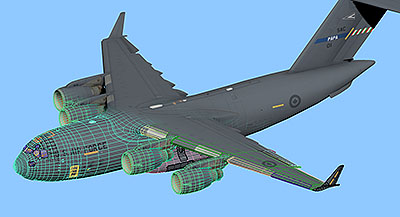 Virtavia is pleased to offer licenses for the the complete .max (Max14, some Max9) model and texture source files as well as accompanying gauge/modeldef .xml and flight dynamics (for FSX/P3D) files for many of its range of aircraft models. These source files will allow experienced developers to produce their own modified, improved or converted versions of Virtavia aircraft as they see fit, for personal or commercial use.

Models and images generated with the source can be sold royalty-free, however it is prohibited to distribute or sell the source files themselves. The texture source .psd files can be distributed freely however. Max14 files can be opened by any later versions of 3DSMax, but not by earlier versions

For those developing for FSX, FSX-SE and Prepar3D, a special Export folder is included with instructions how to easily convert the mesh to a .mdl ready for the sim, as well as texture conversion folders with the necessary executable .bat files for producing the .dds files needed by the simulator. Everything has been thought of to make it easy for the developer to use these source files.

These animated and UV-mapped meshes are not restricted to FSX and P3D - with the right skills a developer can use them to make products for any simulator, such as X-Plane, MSFS2020, DCS World, ARMA, Unity projects etc.

Contact Virtavia on tech.support (at) virtavia.com if you are interested in obtaining any of these source files.